All living organisms are composed of a cell which is the smallest structural unit of living matter. A cell acts as a powerhouse to sustain the functions of living organisms for them to be alive, and it is made up of different components performing different functions.  The organelles that make up a cell include the nucleus, mitochondria, plasma membrane, cytoplasm, vacuoles, ribosomes, endoplasmic reticulum, Golgi apparatus, Cytoskeleton, lysosomes, and peroxisomes, each of them acting independently to sustain the cell’s life.

The nucleus is the main headquarter of a cell and contains most of the cell’s DNA, genetic code that contains hereditary information. It’s bounded in the eukaryotic cell membrane, and it controls and regulates cell growth and metabolism. Within the nucleus, a nucleolus is responsible for producing and assembling the cell’s ribosomes. Ribosomes as cell components consist of RNA and associated proteins that synthesize proteins (McCance & Huether, 2018). This protein is required in many cellular functions, such as directing chemical processes. The lysosome is another cell organelle that contains digestive enzymes. These lysosomes break down worn-out parts of a cell and may destroy invading viruses and bacteria. Peroxisomes are another bag of enzymes that destroy toxic materials.

Mitochondria is the cell’s powerhouse located in the cell’s cytoplasm, which plays an imperative role in cell respiration. It generates most of the chemical energy required to power the biochemical reactions of a cell (McCance & Huether, 2018). This chemical energy produced by the mitochondrion is stored in adenosine triphosphate (ATP). The cytoplasm is another cell organelle that holds components of a cell and protects them from damage. It also stores molecules needed for cellular processes and gives the cell shape.

As another cell organelle, Cytoskeleton is responsible for maintaining the cell’s shape and provides mechanical support that enhances cell division and movement.

The smallest structural unit of living matter plasma membrane, also known as the cell membrane, transports nutrients into the cell and toxic substances out of the cell. It also provides additional support to the cell. Within a cell, we also have the Golgi apparatus, also known as Golgi bodies, which process and package proteins destined to be exported from the cell and lipid molecules (Wayne, 2019). Another organelle is the smooth and rough endoplasmic reticulum responsible for producing proteins for the rest of the cell to function.

The smallest structural unit of living matter vacuole is another cell component that stores molecules, including water, food product, and enzyme. It also maintains the proper cell hydrostatic pressure as well as maintaining an acidic internal PH. It also isolates toxic materials that might be a threat to the cell.

All the functions of the body rely heavily on the dignity of the cells. Therefore, to understand the disease, an understanding of cellular biology is inherently necessary. Through the process of differentiation, or maturation, cells become specialized, allowing certain cells to perform one function while others perform another. Plasma membrane, cytoplasm, and nucleus are the three major components of a cell.

Membranes delineate the cell’s borders. Membranes are essential for normal physiologic function since they control the composition of the vacuum, or compartment, in which they enclose, whether they surround the cell or enclose an intracellular organelle. They can allow or disallow different molecules to travel in and out of space, as a result of the selective transportation systems. By regulating the passage of substances from one compartment to another, membranes have a significant effect on metabolic pathways. Directional transportation is aided by polarized fields, distinct apical and basolateral fields. Cell polarity retains natural cell and tissue structure for a variety of purposes, the most important of which is the transfer of nutrients in and out of the cell but is compromised in diseases like cancer. Aside from these features, the plasma membrane is essential for cell-to-cell identification. Other functions of the plasma membrane comprise cellular mobility and shape maintenance.

Cytoplasm is an aqueous solution (cytosol) that fills the cytoplasmic matrix, which is located between the nuclear envelope and the plasma membrane. The cytosol accounts for roughly half of the volume of a eukaryotic cell. It contains thousands of enzymes involved in intermediate metabolism and is densely packed with ribosomes, which produce proteins. Protein synthesis and degradation are primarily carried out in the cytosol. In the absence of a sorting signal for transport to a cell organelle, newly synthesized proteins remain in the cytosol. Organelles suspended in the cytoplasm are encased in biologic membranes, allowing them to perform functions requiring multiple biochemical environments at the same time. Such roles include synthesis of proteins and hormones and their transport out of the cell, separation and removal of waste products from the cell, metabolic processes, breakdown and disposal of cellular debris and foreign proteins (antigens), and maintenance of cellular structure and motility, all of which are directed by coded messages carried from the nucleus by RNA. The cytosol also serves as a storage location for fat, carbohydrate, and secretory vesicles.

The nucleus is the largest membrane-bound organelle. It is surrounded by cytoplasm and is usually situated in the cell’s center. The nucleus’ key functions are cell division and genetic information regulation. DNA replication and repair, as well as transcription of data encoded in DNA, are among the other functions. 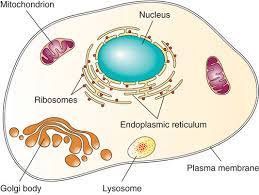 Submit Paper Details
Issue instructions for your paper in the order form. Include a discount code if you have one. Your account will be created automatically.

Your payment is processed by a secure system. We accept PayPal, MasterCard, Visa, Amex, and Discover.

Communicate with your writer, clarify all the questions with our support team, upload all the necessary files for the writer to use.

Check your paper if it meets your requirements, the editable version. If any changes are needed, send the order for revision.